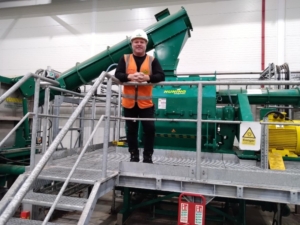 Vernon Ward joined Eco Verde Energy (EVE) 6 months ago to manage one of the plants EVE operates in Attleborough, Norfolk. Vernon’s speciality is in electrical mechanical engineering and although he is quite new to EVE, his experience in the renewable energy industry began many years ago.

“I began my career in anaerobic digestion (AD) in 2012 at a site called Holton Renewable Power, which now also happens to be operated by EVE. I was an engineering supervisor and worked my way up to site manager. It was just a green field when I started and I was a part of the project since the first spade went into the ground. I then moved to Ellough AD Plant in 2014 (again now operated by EVE), which was the same situation, just a big open field.”

Attleborough AD is the third site that Vernon has been involved in during the construction phase and he has been a key member of the team during the commissioning phases. Vernon’s main role at the site is to manage a team of 5 and he works closely on feedstock, health and safety, gas output, staff training and working with the environment agency.

The plant is now ramping up and feeding waste, Vernon looks forward to the plant sending its first fully renewable green gas to the grid very soon.

“This site is particularly interesting as it will see Attleborough town become one of the first green towns in the UK to be supplied mainly with green gas. What’s more, the plant will provide households with 10MW of biomethane per hour – enough to supply 4,000 homes and guarantee green gas for most of the year!”

Vernon is committed to working in the renewable energy industry and strongly believes AD plants can help tackle climate change and reduce greenhouse gas emissions in the UK.

“I am proud to work in an industry that is good for the environment. The less waste going to landfill will mean a reduction of greenhouse gas emissions being produced. My time at EVE so far has been brilliant and it is great to work for a company that is making a positive difference and investing in its growing team” 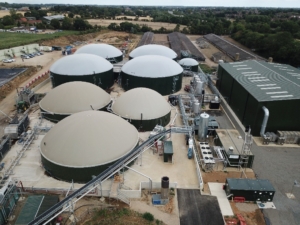