According to The World Economic Forum, the Conference of the Parties (COP) is the group of nations that have signed the UN Framework Convention on Climate Change (UNFCCC), which was put together in 1992. It commits them to act together to stabilize greenhouse gas concentrations “at a level that would prevent dangerous anthropogenic (human-induced) interference with the climate system”. Since then the parties, or nations, have met almost annually.

COP27 was held in the Egyptian coastal city of Sharm El-Sheikh on 6-18 November. Every year, a different country from a different world region takes up the COP Presidency, to convene world leaders and define priorities.

What did it hope to achieve?

The outcomes agreed upon from COP27 are as follows:

The World Biogas Association at Cop 27

The Biogas Industry had a voice at COP 27, with a session held by the World Biogas Association (WBA) to advocate a future where organic wastes are seen as resources and biogas is a key component of the energy transition.  The session also discussed the ‘Global Methane Pledge’.

According to the WBA, participants joining the Pledge agree to take voluntary actions to contribute to a collective effort to reduce global methane emissions by at least 30% from the 2020 levels by 2030. This could eliminate over 0.2˚C warming by 2050.

Participants also commit to using the highest tier of the Intergovernmental Panel on Climate Change (IPCC) inventory methodologies, as well as working to continuously improve the accuracy, transparency, consistency, comparability, and completeness of national greenhouse gas inventory reporting under the UNFCCC and Paris Agreement to provide greater transparency in key sectors.

In summary, while there are several opportunities for the Biogas Industry to help capture methane emissions, notably the U.S, providing a $20 Billion investment in the reduction of methane emissions and the far-reaching national legislation to reduce methane emissions from industry, the wider picture on progress is underwhelming.

There still isn’t an agreement globally to phase out fossil fuels which is known to be the primary cause of the global climate crisis. Despite India and the European Union calling for all fossils fuels to be phased down there was no further commitments announced. There was only a call for “accelerating efforts towards the phasedown of unabated coal power and phase-out of inefficient fossil fuel subsidies”.

We must transition to renewables and the time is now to turn words into actions. As the UN secretary general, António Guterres stated on Thursday, “This is no time for finger-pointing. The blame game is a recipe for mutually assured destruction.” We can all do this at an individual, local, national and global level. To make a significant impact, the government and industry need to work closely together to meet reduction targets, through government incentivisation to ensure sustainability and ethical leadership practices are embedded within business decisions.

As an environmentally conscientious operator, Eco Verde Energy (EVE) is constantly looking at how to reduce methane emissions, through the effective operation of their plants. Feedstock management, active monitoring and inspection of plant and equipment are key to achieving this. Our goal is to be innovative and adopt a continuous improvement mindset in environmental management and reporting.

What is COP27, why it matters and 5 key areas for action | World Economic Forum (weforum.org) 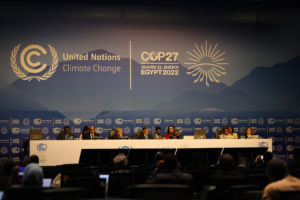